Well it might seem that the only catwalks at the moment are overseas, but, turns out we can show those International Fashion Weeks a thing or two back home. The incredibly talented Sloans artistic teams from the award winning Lane Cove and North Sydney hair salons were recently spotted backstage at the Telstra Perth Fashion Festival creating stunning hair looks.

Hair Director and L’Oreal Professionnel Ambassador Scott Sloan runs us through his favourite looks of the festival.

Opening Night:
For the first night we wanted to make an impact with a look that was slick and architectural. I wanted something visually unique that would set the standard for the shows to come so we worked with a fresh take on a mix between a ponytail and fishtail braid. With the sleek finish of a low set ponytail, that classic runway staple, we mixed it up by wrapping the hair down the length and the finished product was then further embellished with beautiful jewelled pieces.

Night 2:
For this show we wanted to create low set ponytails but make them messier and more flyaway, giving each girl a final look personalised for her unique hair. The hair was prepped with plenty of texturiser and then teased out with the hands, before being tied several times down the length to add volume and a spherical effect that looked amazing as the girls walked. We also worked in elaborate whimsical headpieces to give an overall ethereal feel.

Night 3:
Glamour, glamour, glamour. This look was all about smouldering sexy eyes and sleek hair. We created a precise centre part and pulled the hair off the face and shoulders to accentuate the girls faces and the stunning gowns. The key here was lots of shine and smoothing out the finish for a glass like effect.

Night 4:
Possibly my favourite look of the bunch as it was so much fun to create and it set up the very fun vibe backstage. The inspiration for this look was Studio 54 and 70’s rockstar babes rollerskating in hot pants. The look was created with the iconic curtain fringe flicked out at eye length from the face giving a flattering face framing effect. We also added plenty of volume through the crown and gritty texture at the ends.

Closing Night:
This look again needed to be quite dramatic and sexy but we wanted to make it stand out from the Night 3 look, so we worked with the idea of a beautiful version of the mullet. This is not your traditional mullet by any means, this is one that belongs on the runway. The hair was slicked back along the sides and back and then the front section at the crown was flipped over the face so we could create volume underneath. The front section was then flipped up and over and brushed over for a super smooth finish. Lashings of hairspray were required for that glossy effect and to hold everything in place.

What a week! See you next year TPFF!! 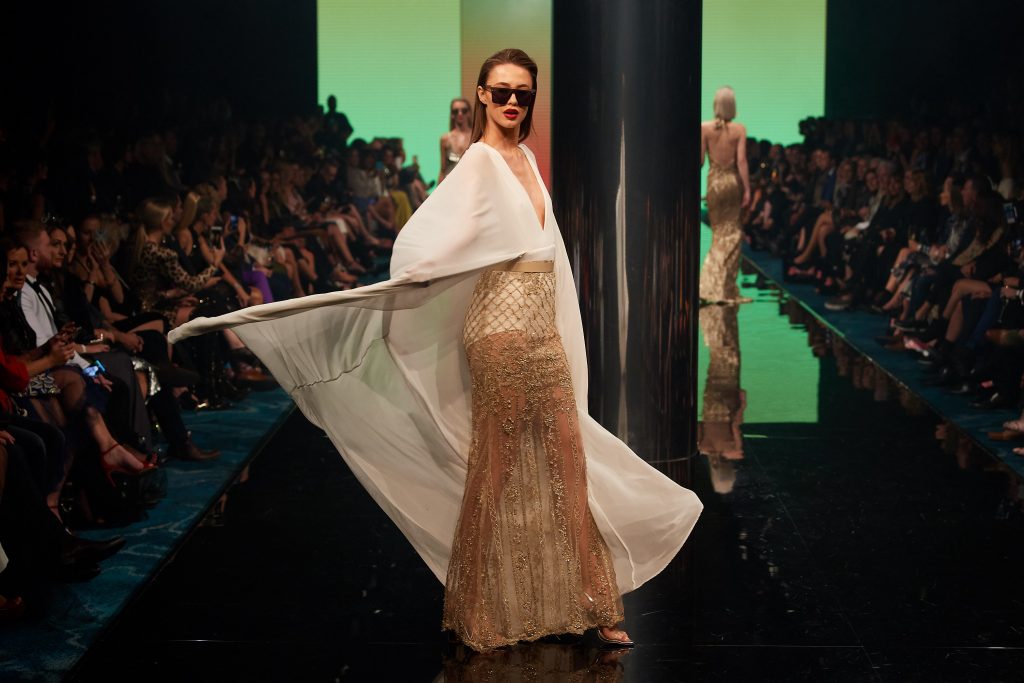